The essence of enlightenment .process lies in moving upward from root Chakra to crown Chakra. Mooladhar Chakra as the name suggest Mool means root or the base and aadhar means support. The whole Chakra system is based on the root Chakra.

Root chakras function is about the survival of a being on this earth. so it mainly concerned with the primitive requirements for survival.

Each of the Chakra shows human development – physical, mental and spiritual,

Heart Chakra is the bridge between lower and upper chakras so it’s very important Chakra in the Chakra system.

Mooladhar/Root Chakra – this is the first Chakra, located at the base of the spine, Coccyx is the exact location of the Chakra.

The main color of the root Chakra is Red. 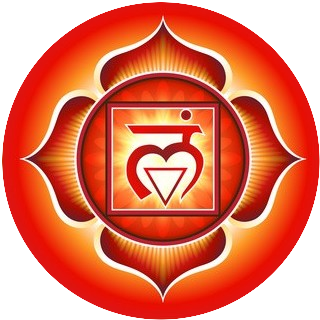 Focus on the Root Chakra, intend for a specific result, like if you have a lower back pain, there may be an underlying issue, which need healing on emotional level, intend to have a healthy spinal column.

It’s best to intend for cleansing, removing any negativity and a have a healthy Chakra. Intending for a specific result, will limit the scope of healing .

Observe any feelings and emotions arising, let it come to surface, observe those feelings and emotions. don’t’t react to feelings, be neutral and unbiased while viewing this process.
Say the Hoooponopono prayer in your mind or aloud as you guided to. Repeat the mantra till you feel released and relaxed. Take as much time needed to.

once done with the root Chakra and move to Sacral Chakra swadhisthan Chakra.

Sacral Chakra Chakra is the place where all the past karmas or sanskars are stored. so it’s the best place to work with ho’oponopono if you have any past life issues.

Concentrate on the Sacral Chakra Chakra, lower abdominal area and the color of the Chakra is orange.

Focus on Sacral Chakra Chakra, observe any arising emotions and feelings. Say the ho’oponopono prayer till you feel released. done with this Chakra, move to solar plexus or manipur Chakra.

manipur Chakra or Sacral Chakra Chakra is located near naval area and the color is bright yellow.

The main function of this Chakra is self esttem confidence and power.

Intend for cleansing and removing any negativity of the solar Chakra and have a healthy solar Chakra.

Repeat the fogiving prayer, for few minutes or as much-needed once you feel light and relaxed move to heart Chakra.

Heart Chakra or anahat Chakra is the bridge between lower and upper Chakra. so balancing these energies is the main function of heart Chakra.

This Chakra deals with All the problems related to physical nd emotional issues of heart,

Intend to cleanse any negativity and have a healthy heart Chakra.

Say the ho’oponopono prayer to release any negativity concerned with this Chakra, once you will release move to throat Chakra.

Throat Chakra or visshudhi Chakra is located in the throat area and color is blue.

Throat Chakra is related with communication, any unreleased emotional issues or emotional blockage due unable to speak up for yourself.

Intend to cleanse the Chakra, release any negativity concerned and have a healthy Throat Chakra.

Say the Ho’oponopono prayer, till you feel release. Done with this Chakra move up towards Agnya Chakra.

Agnya Chakra is located between two eyebrows and color is violet.

Agnya Chakra is most important Chakra as pituitary gland is located near Agnya Chakra or third eye Chakra. As name suggests it gives orders (Agnya-third Eye Chakra) and controls the main/major functions of our system

This Chakra is highly connected with spirituality and higher realms.

Intend for cleansing and removing any negativity with this Chakra and have a healthy and balanced third eye Chakra.

Say the forgiveness prayer till you fill released and relaxed. It may take a few minutes.

Once done with this Chakra move to sahastrar Chakra.

Crown Chakra or sahastrar Chakra is located on top of the head and color is violet / whlite.

This is the top most Chakra in the Chakra system and related to higher spiritual realms.

Intend to cleanse and clear any negativity connected to this Chakra and have a healthy crown Chakra.

Say the ho’oponopono prayer till you feel released and relaxed.

To end with this meditation pay gratitude towards the Almighty and Universe, for giving you a healthy mind and body.

Repeat this procedure every day for a few minutes for 21 days. As mentioned above after you finish 21-day schedule of meditation, take a 7-day break.

Notice any vibrational shift during this 7-day break.

After 7 days, start again this Ho’oponopono prayer. The 21-day schedule is to observed only once, after that continue with chanting this mantra as and whenever needed.